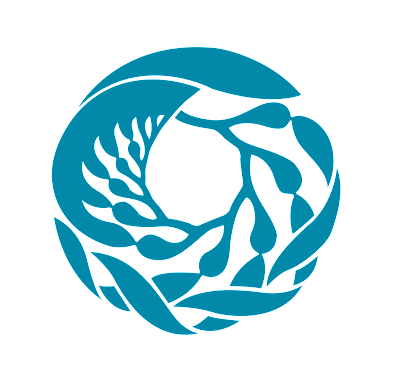 This is my vote:

I'm having trouble tracking down its creator, and I find that puzzling, since I'd think someone or some agency would want his/her/its props.

Why do I like it? It's compact and and multitextured and multicontextual, and allows me for the first time to use the word multicontextual. At its core, it's a circle and a representation of the Giant Kelp species that forests Monterey Bay, Macroystis pyrifera. Whoever designed this took great care to show the botanical relationship between the stipe (stem), the floats (bulbs) and blades or fronds of the kelp.


The kelp curls in on itself suggesting at once the curl of a wave, and fins, many and one. At the bottom, the blades/fins begin to twist around one another, suggesting a DNA double helix. The negative spaces created as the blades blend together toward the center hearken of teeth and a variety of marine shapes. Then you've got the whole cycle of life ethos going on. That's what I see in the mark, anyway.

The aquarium itself doesn't divulge much about the logo: its sole page devoted to the mark, embedded somewhere among its history, explains merely, "The logo of the Monterey Bay Aquarium is an artist's rendering of the growing tip of a giant kelp frond (Macrocystis pyrifera)." Some artist. Don't know. Don't care. Sheesh.

But it's not bad, considering.


The version of the mark at the top of this post perplexes me. If it's from the original rendering, then imperfections are easy to spot, and I would have guessed this was rendered digitally. But the top edge of the blade on top is not a continuous arc; instead, it has a point at the top that interrupts the perfect arc; some of the blades and joining places are also rough, and the shapes indicating foreground and background are kind of clunky and uneven. You can see it more closely by clicking on the image.


The imperfections suggest to me that the mark was drawn by hand, and never cleaned up in digitization. Is that possible?


What's your favorite logo or mark? And who created this one? I'm dying to know.
at 6:00 AM