It's a hallowed, hollow anesthetized
"Save my own ass, screw these guys"
Smoke-and-mirror lockdown 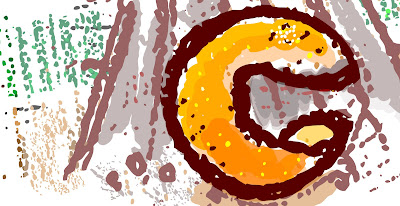 The morning after the Supremely Lovely Day, one of the loveliest ever,
I regarded the
hollow orange.

It lay in the backyard of the house we had rented, at the base of the tree from which it had fallen. Since then a critter had carefully and completely devoured its fruit.

I'm guessing it was a possum. We had seen two of them slink along a concrete gutter at the back fence the morning of the Lovely Day. The homeowner noted in her rental instructions that it's OK to feed the gray neighborhood cat should it happen by. We joked that maybe the nearsighted homeowner only thinks they're a cat.

The orange rind remained full and round, even with a flap across its middle clipped away, the shape of a rawhide flap on a baseball. Though the other baseball flap is all that remained, the rind held its shape.

In this quiet moment, soft talking all around in the backyard, the rind made me think of my country, hollowed out steadily as I write. The thought of it dampened the afterglow of the Lovely Day, in which our son and his beautiful fiancée got married.

That Day overflowed with novel sensations. Useless as ever, I stayed off to the side and witnessed the pell-mell rush to complete the many last details, which had been dreamed and planned for more than a year.


Unseen from high above in the cathedral, a choir burst forth, their intertwining harmonies filling the immense cube of space, and seeming to set fire to the gold leaf in the iconography, the Bible stories, that adorned every surface.

It was joyful and bewildering, committed now to memory, bright and fierce.

Much of the rest of this year, however, has been ashes.

They are away now, the new wife and husband. They are out of the country, on a new chapter of their adventure together. It's not really a secret where, though I don't feel like disclosing. I feel in a way I have helped spirit them away. They are somewhere safe — safe from their own country, now being eaten away, like the orange, but looking somehow whole.

Our other child is stateside, in the country. I wonder what our children think of this place now. I could not have imagined what it's become.

In sixth grade I penned a school report about our country taken over by Russia or its simulacrum, of a transplanting of our representative government by a dictatorship, of our freedoms instantaneously removed, and how that world looked. But in my literary device it was all a dream, because the country in which I had grown up, by its very rightness, would not so much as brook a takeover.

I have thought that way, more or less, through my life. Despite its egregious behavior at home and abroad — for all its many failings and sins — my country was still right, an experiment worth improving. Though it has faced threat and extinction many times, my country would hold and thrive.

This is real, and this is worse. With the Trump administration, this is a daily dismantling from within, a taking away, a making less.

I watch the daily creation and vilification of the Other. The Other are legion — women, blacks, Latinos, Muslims, Jews, immigrants, Dreamers, the poor, critics, opponents of their thoughts and actions, activists for constitutional rights. The environment. The world.

I watch denizens of the Trump swamp take power, deliberate and swift, as if with orders to make whatever Is within their power, suddenly Not. Whatever Was, Will Not Be any more, for its own sake. Step by step, agency by agency. I watch them fly about the world needlessly at enormous taxpayer expense, then lecture us against fraud and waste.

I watch Puerto Rico drown in a hurricane and debt and denigration, and then see President Trump say he's doing a terrific job.

It is not just blatant. It is the Age of Flagrancy.

What is not on purpose is instead capricious, the stuff of unthinking, dangerous whim.

I wake up each morning with a thought I hadn't entertained since I was an Air Force brat and lived in the Cold War's chill across the coastal valley from the missile base, and could see the rockets lift off, and knew it would be a first target in a nuclear strike:

Reflexively, I think of how our leaders can protect us from the brink, and snap back to the real dread that the man in charge is the one pulling us to the brink.

Ashes flow in the air as I write, ashes from fires all around. Uncontrolled fire has destroyed whole neighborhoods where close relatives live in Northern California. Fire swept close to my childhood home two weeks ago in Southern California, where my sister still lives. Storms laid waste to Texas and Louisiana and Florida and Puerto Rico. A man beyond any understanding shot to death nearly five dozen people and wounded hundreds of others in Las Vegas.

But by all means, let us all denounce football players peacefully protesting racial injustice, and let the man who's supposed to lead us use is energy to confuse his followers that it's about disrespecting the flag.

My beloved San Francisco Giants finished one of their worst seasons this year. Three years removed from their third World Series win in five years, the Giants won 64 games but lost 98, tied for the worst record in baseball this season. They finished the season 40 games behind the first-place Los Angeles Dodgers. The Giants battled hard not to lose 100 games. Lou Seal had little to cheer about. Our children's wedding, and not much else.

Every team opens the season in first place, but the Giants looked good and strong, promising; fans could breathe easy with hope. In lightning speed just a few things happened here and there, and the talented team became a wheezing creature. Funny how little it really takes to derail a vaunted team.