Who else needs one? 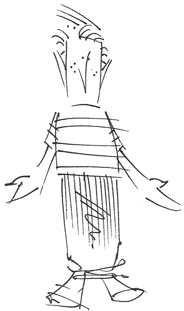 From the fecund folds of my sketchbooks, this forlorn figure who seems to summarize at once the aftermath of 2010 and the prospects for 2011. To wit:
What? What did I do?! and
I need a hug.
Peaceful new year.
at 10:25 AM No comments:

Once more with Craig and Dave 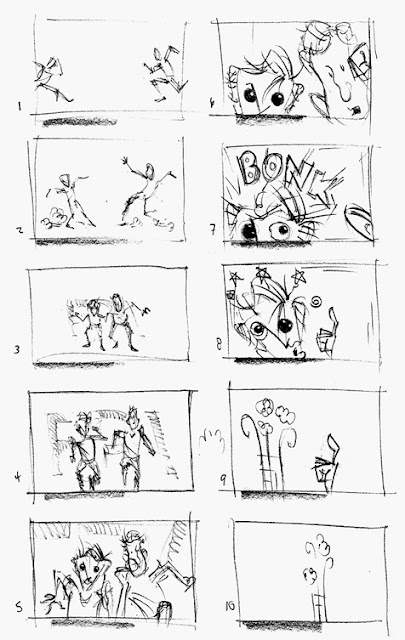 Somewhere during my working relationship with Craig Crume and Dave Curtis of Field-Portable Analytical (see my Dec. 17 entry), we apparently discussed an animated opening for FPA's Web site. One or all of us always seemed to be "blue skying" a lot of ideas, so I don't know how serious this idea was; we never discussed the "how" of this sequence, for example. I remember that it was going to be much like TV's Batman series, except with heavy dollops of Buster Keaton, as this sequence shows.

This makes me wish I could make my living just drawing thumbnail-sized storyboards. The challenge for me is always to retain in a finished drawing the liveliness of a sketch, and sometimes I end up sapping the energy in the translation.
at 8:15 PM No comments:

Out with the old, in with the … oh, for heaven's sake!


Goodbye to Gov. Schwarzenegger, and the third time's the charm for Jerry Brown. He might be as much fun to draw, should I get the opportunity. Lord knows I had several tries with Arnold: 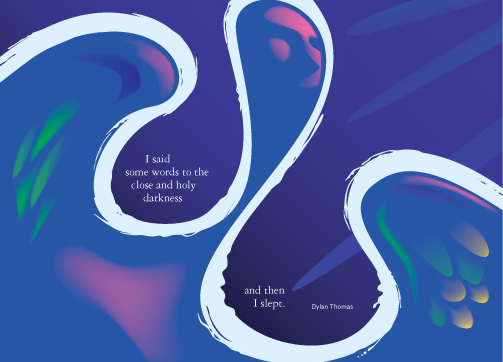 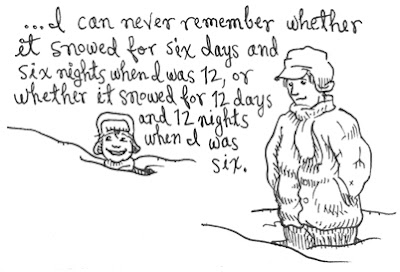 Find rest and inspiration this holiday. I always seem to find both in one of my favorite traditions, reading Dylan Thomas' "A Child's Christmas in Wales."
at 7:03 PM No comments:

My friend and former next-door neighbor from childhood, Buddy, alerts me to the actor Jeff Bridges'  Website. It acts as a blog as James Thurber might have created it, and it opened my eyes to the actor's other facets and interests. My first three thoughts:

• Is this really the actor?
• What I wouldn't give to be as free as he is in my artwork.
• His band is called The Abiders.

Looking for the right script 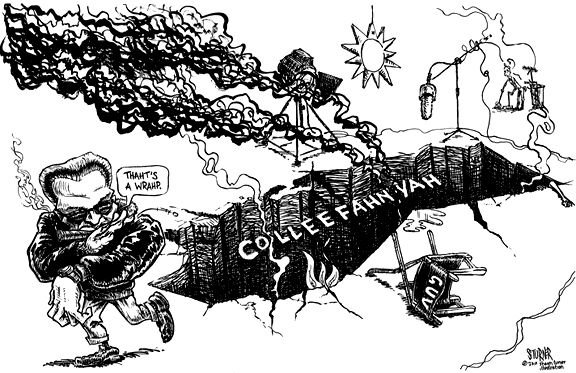 Hollywood pals and other assorted top-shelf Beautiful People last week threw Gov. Schwarzenegger a lavish "Wrap Party" to commemorate his exit from the top of the State.

It occurred to me that maybe this is what Gov. Schwarzenegger thinks he has done: Wrapped up one more movie role to advance his career, endearing himself once again as the action hero. With the final scene shot, he must think that all the casualties of his time as governor will simply get up off the ground, collect their SAG fees and go home … that craft services will deliver all the leftover tri-tip and veggie-tuna wraps to the Union Gospel Mission … that the carpenters will repaint and patch all the stage sets … and everything will be all better again.

He's not alone to blame. But lawmakers are smart enough never to promise anything beyond running for another office once the offices they hold term out. Schwarzenegger came in promising he'd pull us out of the hole Gray Davis left; instead his gang brought shovels and dug deeper.

We used our power to vote unwisely (or not at all) on the novelty of electing another movie star to high office, and weren't prodding our representative government to represent.

Schwarzenegger as governor never seemed more than a practical joke that he and Jay Leno dreamed up to guarantee at least two blockbuster bookings for his show: When Schwarzenegger threw his hat into the rink seven years ago (was it that long ago?) and this year when he retrieved it. We voters bought into the gag.

Don't be surprised if Schwarzenegger eventually casts about for the role of president. (Remember when we all thought that might be feasible? Just a matter of tweaking the Constitution, and if some conservative cranks think they can fiddle with the Fourteenth Amendment, what could be so hard?) He'll wear this mess as his crown of laurels, spun by well-paid publicity.

(Since I started cartooning during George Deukmejian's administration, Gov. Schwarzenegger is the governor I've drawn the most — by far — and that's without even trying hard. The difference is that many nonpolitical clients —witness the previous post — harnessed the Governator's notoriety. It makes sense: An ad featuring Pete Wilson's featureless caricature won't get you much mileage. )
at 3:23 PM No comments:

Out with the old, part 1 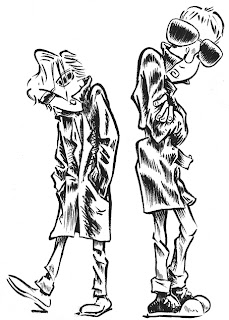 Before I drop any new stuff, I’ll share some old, while the warranties are still good:
One of the things I’m most thankful for as an illustrator is working with people who served as a kind of patron of my art. In a minuscule and modest way, they’ve been like the Medicis to Michelangelo, or the Container Corporation of America to the world’s great 20th century graphic designers. They’ve given me space to have fun, and confidence that I’ll produce something unexpected.
Two such patrons were Craig Crume and Dave Curtis, who had a company called Field Portable Analytical. They have long since gone their separate ways, but at Field Portable they used these Ghostbuster-like backpacks to test emissions (gases, liquids, whatever) for the military, governments and businesses, and could deliver accurate results faster than their competitors, usually brick-and-mortar labs off site. They even flew their own plane from site to site.
It's dry, esoteric, science geek stuff. To combat all that, Craig and Dave enlisted my help in recasting them as the merry pranksters of their trade, the clown princes of the convention circuit. They hired me to create a comic strip (“Field Porta-Bull with Dave & Craig”) for their company Web site, which also featured golf course and movie reviews. They liked their fun.
Taking on duct tape, bureaucrats and even Santa himself, Craig and Dave didn’t mind being portrayed as fumbling, gung-ho ne’er-do-wells in their own strip.
The strip at the tippy top of this post was "Field Porta-Bull’s" brief foray into digital comics, and I thought I’d share it before Gov. Schwarzenegger drives his Hummer off into the Santa Monica sunset. All of the other strips gave the chance to work in watercolor and try to make it pop onscreen.
Only a few outside their industry would get any of the jokes, but it was fun mucking about in their world. I miss that.
at 7:26 AM 2 comments:

As good a place as any 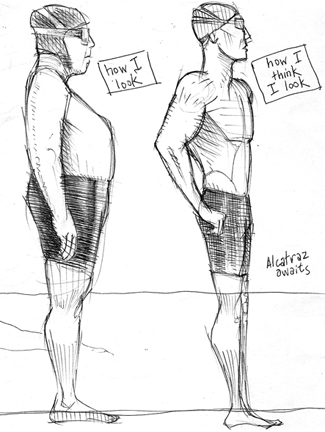 This is where I'll post new work and work in progress (visit the rest of my stuff at www.shawnturner.com, thanks to Matt Keogh and the stalwart folks at PageWeavers) … doodle a comment on this day or that … dredge up old work on occasion, for the benefit of you who haven't bailed out already … and fawn over illustrators and other creative types.

In other words, it's all about me, me, me, and occasionally other people.

This sketch sums me up: I confess to a Mittyesque view of my place in the world, and as a wannabe long-distance swimmer, I picture myself as the sleek guy on the right when I suit up for open water races. Then someone inevitably has to ruin my reverie by taking a photo. I'm still sleek, in the way sea elephants must seem sleek to one another.

This blog and I are works in progress.
at 4:57 PM No comments: