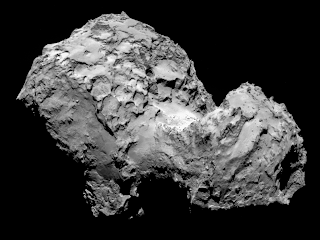 This art always left me embarrassed, and I never had cause to show it — except for self-flagellation. Which I'm not above.

But events transpired last week that demonstrate quite clearly:

Does, or does not, that ugly lump the Boy Scout is holding high aloft resemble 67P/Churyumov-Gerasimenko, the comet that the European Space Agency's little ship Philae landed on, more than 300 million miles from Earth?!

And didn't the space agency begin its amazing chase for the comet 10 years ago, when I made this art?

Wasn't 67P, as its friends call it, just a blip on a screen of blips back then? Could I have known its shape? No.

I'm like Roy Neary in Close Encounters of the Third Kind, raking a pile of mashed potatoes into the shape of Devil's Tower without really knowing why.

Call Spielberg. We've got a movie to shoot.


(Let me just say: If Philae never makes another peep from its shady perch on 67P, never sends another bit of data, this endeavor will still have been worth the undertaking. I hear the same chestnut popular when I was a kid and Apollo astronaunts walked and rode and golfed on the moon: Why? When we have so many problems on earth that need money and attention?

(I can't disagree about the problems. We've probably got plenty of solutions if we only willed ourselves to apply them and weren't sheep to convention and politics and fear and deference and obfuscation.

(We yearn to know, though, and I say "Go!" We want to understand the innumerable mysteries that surround us. We yearn for it so deeply that smart people figured out how to aim a rocket at a comet in fast flight millions of miles away. It sent a satellite (Rosetta, named after the stone that helped smart people decipher ancient Earth languages) which flew by Mars and specific asteroids on its way to 67P, and finally, deftly, dropped its own spaceship, Philae (named for the obelisk smart people used to help unlock the mystery of Rosetta), nestled in the satellite's womb for a decade, on to the speeding comet, where it landed with a couple of slow bumps.

(More than 300 million miles from here.

(For all those amazing accomplishments, the pity is very small that Philae's harpoons did not work and the little lander bounced from a flat sunny place to a precarious dark spot on the comet, where the sun could not recharge its batteries.

(Keep trying, I say. Keep going. We learn from Philae, and will still from Rosetta as it orbits 67P; we will learn from the next one.)

The thing in the Scout's upraised arms is not the comet, of course (or is it?) It's supposed to be a fairly realistic lump of gold, though realistically the Scout would have a hard time lifting such a lump off the ground, let alone over his head.


(Also, realistically speaking, what are those, some kind of comic book superhero Extend-O Arms®™? See, I'm good at this flogging business.)

When I was all done and applied color to all the objects, I stepped back and realized: Oh, it looks like the Scout is holding excrement. Dung. A turd. A cow patty, not unlike what one would find on the cattle ranch that played host to the Scouting event being promoted.

It doesn't look any less like feces in black-and-white, I'm afraid.

I changed out the lump for a gold ingot in the final art (or I think I did), and stamped the bar with "24 K" to stamp out any doubt.

Camporee is a sort of Scout Olympics, in which Troops and Packs within geographical regions compete in Scout skills, and build monkey bridges out of ropes and sticks, and eat s'mores, and hang out at a big campfire, and go to Sunday services if their stupid Scoutmasters really, really insist, and generally goof off.

The two Scouting districts, Pioneer and Prospector, were merging that year, and this event was a kind of mutual Welcome Wagon.

Camporee took place in the wet red earth of the foothills not far from where Gold Rush encampments filled the Sierra ravines.

Who knew we were really prefiguring a gold rush of discovery in the heavens?

In other news: The best name yet in the incessant email come-ons I receive for sex enhancement drugs: Mrs. Dolorisa Mooring enjoins me to "Make her shiver in ecstasy and desire more!" So Victorian, so illicit!
at 12:02 PM